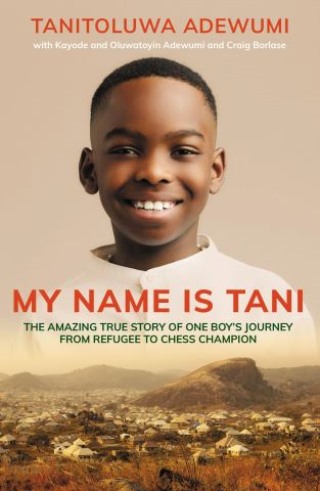 My Name is Tani

My Name is Tani: The Amazing True Story of One Boy’s Journey from Refugee to Chess Champion

The story that is inspiring everyone! Soon to be a Paramount motion picture.

Draw deep into the dramatic account of escape from terrorism.

Tani Adewumi’s story begins amid Boko Haram’s reign of terror in Nigeria, but this doesn’t stop him from pursuing a most unlikely dream. At the age of eight, when Tani and his family’s lives are threatened, they are forced to flee for their lives and seek asylum. The odds were against Tani for ever finding a prosperous life in a foreign city, once enjoyed in his native Nigeria. But sometimes the unexpected is found in the most unlikely circumstances.

As Tani’s family becomes a target for capture and killings, their miraculous escape takes them across an ocean to New York City. Tani’s father, who comes from a royal family and has left behind thirteen employees in Nigeria, becomes a dishwasher and an Uber driver to support his family. Tani’s mother, whose family helps to oversee the finances for a large Nigerian printing press, worked at a bank for more than eight years but is now training to become a home health aide.

After eighteen months, the family is still at a shelter, unbeknownst to Tani’s classmates. One day Tani asks his parents if he can join the chess program. It seems unlikely since a fee is required. His mother writes to the coach, who offers Tani a scholarship. Tani jumps in to learn the game. The result is not only an unexpected twist of events in a chess competition but also the rescue of an entire family.

In My Name is Tani, we witness the crossfire between miracle and mayhem. A young boy with only a dream in his heart recounts his harrowing escape from Boko Haram’s grips and changes his destiny in the process when he finds purpose in the most unlikely of places – a chess championship.

In step with The Girl from Aleppo, and in the spirit of I am Malala, Tani’s story sheds light on living through terror. This story of community and hope recounts the lengths parents will go through to find safety for their family. It’s a story of what happens one you dare to dream.

Tani Adewumi is the eight-year-old Nigerian-born boy who recently won the NY State Chess Championship after playing the game for only a year. Tani and his family’s story begins amidst Boko Haram’s reign of terror in their native country of Nigeria and takes them to a New York City homeless shelter, where they waited to be granted religious asylum. Tani’s father, who came from a royal Nigerian family, became a dishwasher and Uber driver to support his family. His mother, whose family owned the largest printing press in Nigeria and had been working at a bank for over a decade, trained to become a home-aid. So, when Tani asked to join the chess program at PS 116, which required a fee, it seemed unlikely. His mother wrote to the coach, who offered Tani a scholarship. Miracles led Tani and his family to New York. As Tani’s father puts it, “There are many times in my life where I thought this must be the miracle and yet, I did not know that the miracle had not yet begun.”