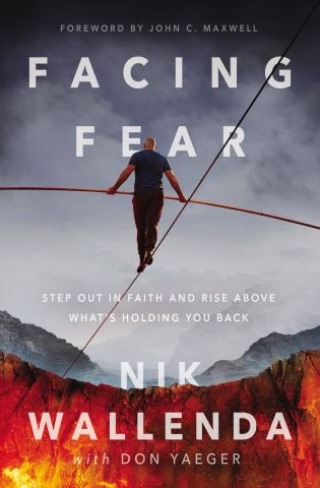 Step Out in Faith and Rise Above What's Holding You Back

Nik Wallenda is the face of the famous circus family known for performing crazy feats without safety nets. Nik is also known for his daring televised tightrope walks, including over Niagara Falls, the Grand Canyon, Times Square, and an active volcano.

Nik is a seventh-generation member of the amazing Wallenda family and has been walking the wire since he took his first steps, but he had never experienced fear until a tragic accident in 2017. The eight-person pyramid he and several members of his family were practicing collapsed, and five of its members fell thirty feet to the ground. Miraculously, they all survived, but the accident changed Nik’s life forever. For the first time, he felt fear, and he had to learn to get past it to get back out on the wire.

Most of us will never walk a tightrope, but we face things that scare us every day. Whether putting ourselves out there socially or seeking a dream job, all of us allow anxieties and fears to hold us back. Facing Fear is a reader-centric memoir, interweaving parts of Nik’s personal story of the accident and how he conquered his fear with practical advice for readers to overcome whatever fears are holding them back. This practical book will help everyday people step out in faith and trust that God will hold them steady, even when they’re afraid.

Nik Wallenda is a seventh-generation member of the legendary Wallenda family.  Known worldwide for his incredible feats upon the high wire and beyond, Nik is the holder of seven Guinness World Records, among which are the highest four-level eight-person pyramid on the wire, the highest and longest bicycle ride on a wire, and hanging from a helicopter by his teeth.  Nik’s career began at the age of two, as he learned to walk the wire while holding his mother’s hand, leading from there to record-breaking performances across the United States and around the world.  In 2012, Nik fulfilled his lifelong dream to become the only person to walk directly over the precipice of Niagara Falls, which was broadcast live by ABC.  In 2013, he became the first person to walk a wire across the Grand Canyon, an epic event aired live by the Discovery Channel in 178 countries, breaking network rating and social media records in the process. The next Discovery special took place in Chicago, where he walked blindfolded between two skyscrapers in November of 2014. In June of 2019, accompanied by his sister Lijana Wallenda, Nik took it to yet another level, becoming the first person to walk over New York City’s Times Square, an event that was carried live on ABC. Nik’s motto is “never give up”, and he carries this positive message with him in every walk with the purpose of “inspiring people around the world to follow their dreams.”