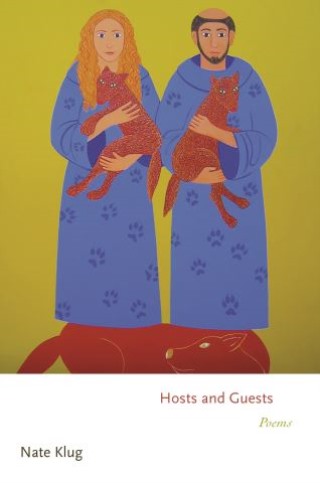 Nate Klug has been hailed by the Threepenny Review as a poet who is “an original in Eliot’s sense of the word.” In Hosts and Guests, his exciting second collection, Klug revels in slippery roles and shifting environments. The poems move from a San Francisco tech bar and a band of Pokémon Go players to the Shakers and St. Augustine, as they explore the push-pull between community and solitude, and past and present. Hosts and Guests gathers an impressive range: critiques of the “immiserated quiet” of modern life, love poems and poems of new fatherhood, and studies of a restless, nimble faith. At a time when the meanings of hospitality and estrangement have assumed a new urgency, Klug takes up these themes in chiseled, musical lines that blend close observation of the natural world, social commentary, and spiritual questioning. As Booklist has observed of his work, “The visual is rendered sonically, so perfectly one wants to involve the rest of the senses, to speak the lines, to taste the syllables.”

Nate Klug: Nate Klug is the author of the poetry collection Anyone and Rude Woods, a modern translation of Virgil’s Eclogues. His poetry has appeared in the Nation, the New York Review of Books, and The Best American Poetry. A Congregational minister, he lives in Albany, California.