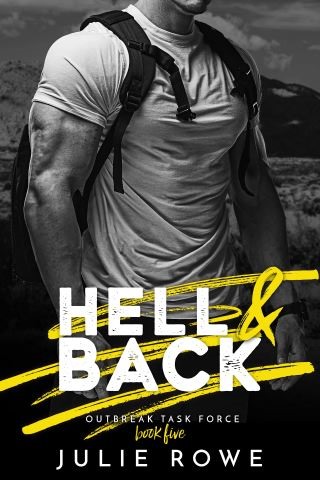 Racing to lock down the CDC's deadly virus samples from terrorists, ex-Special Forces medic Henry Lee partners with Ruby Toth on the Outbreak Task Force. But the terrorists always seem one step ahead. As they work side by side, Henry's taken with how Ruby accepts and respects him, instead of pitying him for all he lost overseas, including his leg. Ruby's hiding something, though, and Henry fears she's been leaking sensitive information.

Terrorists have kidnapped her brother, and now microbiologist Ruby Toth faces a horrible choice. If she doesn't give them a vial of Small Pox as ransom, her brother will die. She knows her prickly—yet very hot—boss, Henry, could provide the help she needs. But she joined the CDC to root out insiders plotting to unleash a bio-engineered pandemic, and she can't trust anyone. Not even Henry.

Julie Rowe: Julie Rowes first career as a med lab tech in Canada took her to the North West Territories and northern Alberta, where she still resides. She loves to include medical details and a lot of adventure in her romance novels. Julie writes contemporary and historical medical romance, and fun romantic suspense. Her writing has also appeared in several magazines such as Todays Parent, Readers Digest (Canada), and Romantic Times Magazine. You can reach her at www.julieroweauthor.com, on Twitter @julieroweauthor or at her Facebook page: www.facebook.com/JulieRoweAuthor