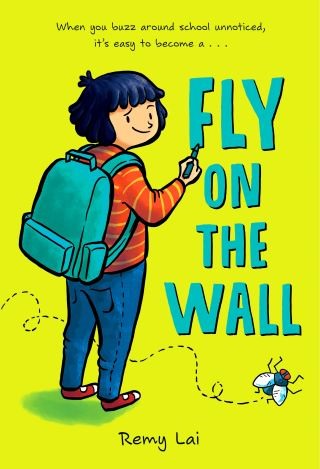 Fly on the Wall

In Fly on the Wall, a moving and hilarious diary-style illustrated novel from the award-winning author of Pie in the Sky, a twelve-year-old boy goes on a (forbidden) solo adventure halfway around the world to prove his independence to his overprotective family.

Henry Khoo's family treats him like a baby. He’s not allowed to go anywhere without his sister/chaperone/bodyguard. And he definitely CAN’T take a journey halfway around the world all by himself!

But that’s exactly his plan. After his family’s annual trip to visit his father in Singapore is cancelled, Henry decides he doesn’t want to be cooped up at home with his overprotective family and BFF turned NRFF (Not Really Friend Forever). Plus, he’s hiding a your-life-is-over-if-you’re-caught secret: he’s the creator of an anonymous gossip cartoon, and he's on the verge of getting caught. Determined to prove his independence and avoid punishment for his crimes, Henry embarks on the greatest adventure everrr. . . hoping it won’t turn into the greatest disaster ever.

Remy Lai takes readers on an adventure filled with humor, heart, and hijinks that’s a sure bet for fans of Jerry Craft, Terri Libenson, and Shannon Hale!

“Funny, enthralling, and a great reminder that being a little odd isn’t a bad thing.” —Kayla Miller, author of Click and Camp

* "Near-misses and laugh-out-loud moments abound, which will endear it to readers who like 'Big Nate' and 'Wimpy Kid.'" —School Library Journal, starred review

Remy Lai: Remy Lai studied fine arts, with a major in painting and drawing. She was born in Indonesia, grew up in Singapore, and currently lives in Brisbane, Australia, where she writes and draws stories for kids with her two dogs by her side. She is the author of the critically-acclaimed Pie in the Sky and Fly on the Wall.