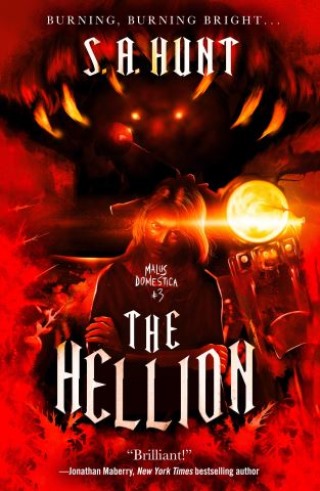 For fans of Chilling Adventures of Sabrina and Stranger Things: S. A. Hunt’s The Hellion, third installment of their horror-tinged action-adventure series about a punk YouTuber on a mission to hunt down the supernatural, one vid at a time

Robin Martine has destroyed witches all across the country, but since her confrontation with the demon Andras, Robin has had to deal with her toughest adversary yet: herself. While coming to grips with new abilities, she and her boyfriend Kenway make their way to the deserts of rural Texas, where new opportunities await.

Something lurks in this isolated town of Keystone Hills: a dangerous gang ruled by a husband who wields an iron fist over his wife and daughter. Robin vows to protect these Latina women from harm, but may be underestimating how powerful Santiago Valenzuela is... and how his shapeshifting powers may pose a threat to everyone Robin holds dear.

The Malus Domestica series
#1: Burn the Dark
#2: I Come with Knives
#3: The Hellion

At the Publisher's request, this title is being sold without Digital Rights Management Software (DRM) applied.

S. A. Hunt: S. A. HUNT (she/her) is the author of the Malus Domestica horror-action series from Tor Books, which begins with Burn the Dark. In 2014, she won Reddit's /r/Fantasy "Independent Novel of the Year" Stabby Award for her Outlaw King fantasy gunslinger series. She is an Afghanistan veteran (OEF 2010), a coffee enthusiast, a fervent bicyclist, and she currently lives in Petoskey, Michigan.